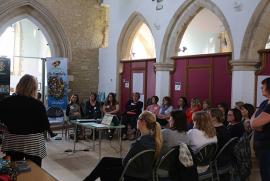 It joined the Business Cluster project offered by the partnership of Resource Efficiency East and Green Business Network.

Prior to its having contact with other organizations, the Centre was given advice on measuring and monitoring and reading utility bills to gain information, and also received a site resource efficiency review to establish whether there were any obvious opportunities for savings to be made.

The Centre Manager, Scott Holden, and an extremely knowledgeable volunteer – Peter Herald – had already started to look at installing a ground source heat pump to replace LPG to heat the Centre. Fortunately, when the building was being refurbished, consideration had been given to insulation and double or secondary glazing has been installed throughout. Supplementary roof insulation has since been fitted to further conserve energy within the building.

GBN was able to suggest some basic low and no cost measures that the Centre could immediately implement to make savings – for instance, switching off lights when areas aren’t occupied and appliances when the Centre is not in use. This included empty refrigerators, freezers, cookers, etc. Other areas were identified where savings could potentially be made, such as replacing halogen spotlights and sodium luminaires when this became viable.

And these minor changes have paid dividends. Even with occupancy of the Centre rising by 7%, cost savings of £1,037 in electricity use have been realized, and also a reduction in LPG use of 887 litres. In fact, the savings together have led to the Centre saving 8.3 tonnes of carbon dioxide in just one year.

The Chellington Centre has also shared its own experience and best practice with other businesses and with other venues. Peter Herald gave a particularly memorable presentation to a GBN seminar on dealing with the obstacles surrounding ground source heat pumps, listed buildings, and architectural heritage sites. However, the same meeting opened up other ideas for the Centre. Peter said, “This has been an extremely useful meeting and has given me some further ideas to explore. I’m going to go away and look at other possibilities, particularly photovoltaics and air source heat pumps.”